The optical transceiver (transmitter and receiver) used for optical-to-electrical conversion is a key component in optical communication systems. In a PON system, an optical transmitter and receiver at the optical line terminal (OLT) or optical network units (ONUs) are typically packaged together to form a bidirectional optical subassembly (BOSA).

The figure below shows the architecture of optical transceiver for an OLT and ONUs. The transmitter optical subassembly (TOSA) consists of a semiconductor laser (Fabry-Perot laser or DFB laser) and a laser driver. The receiver optical subassembly (ROSA) includes a photodiode (PIN or APD), a transimpedance amplifier, a limiting amplifier, and a clock and data recovery circuit. In addition to TOSA and ROSA, a duplex or tripex (WDM filter) is used to separate upstream and downstream wavelengths. The duplex or triplex is usually a thin-film filter, but optical filters (e.g., Bragg grating or a Mach-Zehnder interferometer) based on planar light-wave circuits are becoming a preferred option, as plannar light-wave circuits are more compact, more reliable, and easier to assemble with TOSA and ROSA. As TDM PONs are being deployed on a large scale, significant effort has been put into designing an optical transceiver with improved performance, lower cost, and better reliability. The key challenges in developing optical transceiver for FTTx applications are a higher level of integration, cost-effective packaging, and burst-mode optical transmission technologies in the upstream link. For integration and packaging, optical transceivers are evolving toward plannar light-wave cirsuits and monolithic photonic integrated circuits. 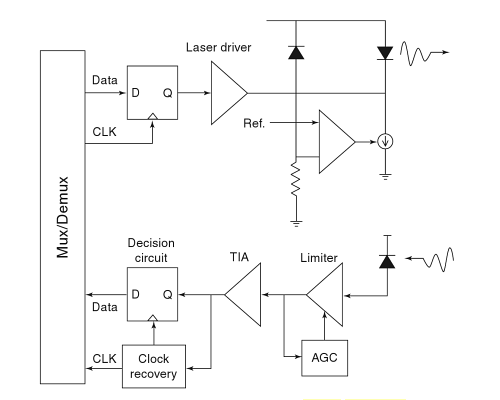 In a TDM PON system, all the users share the same fiber infrastructure from an OLT to the distribution node. In the downsream direction, data packets are broadcast to all ONUs. OLT transmitters and ONU receivers operate in a continuous mode, where synchronization is maintained at all times. Even if there are no data to send to ONUs, the OLT transmitter has to transmit idle bit patterns so that the ONUs’ receiver can retrieve the clock continuously from the downstream signal. However, in the upstream direction, all the users have to be avoided in the upstream transmission, so at any given time, only one packet (from one ONU) is allowed to reach the central office. The OLT coordinates the upstream transmission and schedules the transmission time for each ONU. When an ONU wants to send data to the OLT, it transmits a burst of data in the time assigned by the OLT and then turns off its transmitter completely to avoid interfering with other ONUs’ upstream transmission. Bursts of data from different ONUs following each other to the receiver at the central office are separated by a certain guard time. This type of transmission is called burst-mode transmission. 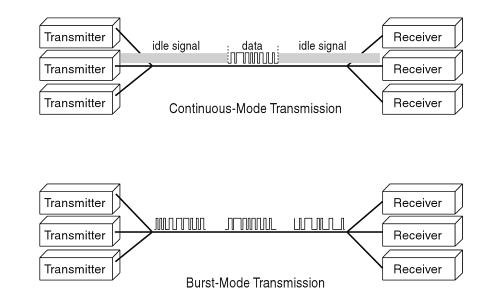 A burst-mode transmitter has to show fast turn-on time as well as good power suppression. The design challenges for burst-mode laser/modulator drivers are rise and fall times and automatic power control. Conventional driver circuits are designed to maintain a constant bias current and voltage. However, good optical power suppression in the idle state requires that the bias be turned off quickly. Driver circuits have to be designed to have short turn-on/off performance. For automatic power control, conventional circuits often use slow monitor photodiode and/or analog filters to average the signal and an analog control loop to analog control loops. It is necessary to monitor optical output sampled at appropriate points in burst waveform.

Conventional optical receivers cannot be used for burst-mode detection because they are not able instantaneously to handle various packets arriving with large differences in optical power and phase alignment. It is therefore necessary to design receivers that can adapt to the variation in optical power and phase alignment on a packet-by-packet basis. The design challenges for burst-mode receivers are dynamic sensitivity recovery, level recovery, and fast clock recovery.

For level recovery, a burst-mode receiver can be designed with a feedback or feedforward structure. For the feedback design, a differential input/output transimpedance amplifier and peak detection circuit form a feedback loop, whereas in the feedforward design, the signal from the preamplifier is feedforward into a peak detection circuitry. Both designs have been implemented in practice. A feedback structure enables the receiver to work more reliably, but a different input/output preamplifier is needed. A feedforward receiver has a faster response time and a conventional dccoupled preamplifier can be used, but the circuitry needs to be designed carefully to prevent oscillation in the reveiver. Level recovery circuits with simple and robust design and good performance are still an open issue that requires further investigation.