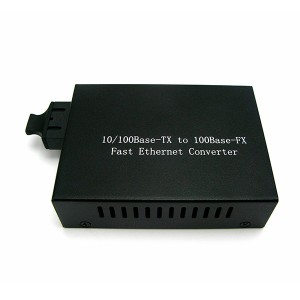 100Base-FX is a version of Fast Ethernet over optical fiber. It uses a 1300nm NIR light wavelength transmitted via two strands of optical fiber, one for receive(RX) and the other for transmit(TX). 100Base-FX should use SC, ST, LC, MTRJ or MIC connectors with SC being the preferred option. However, it is not compatible with 10Base-FL, the 10Mbps version over optical fiber. A 100Base-FX SFP operates on ordinary MMF (multimode fiber) link spans up to 2km.

100Base-SX is another version of Fast Ethernet over optical fiber. It uses two strands of multimode optical fiber for RX and TX. It is a lower cost alternative to using 100Base-FX, because it uses short wavelength optics which are significantly less expensive than the long wavelength optics used in 100Base-FX. 100Base-SX can operate at distances up to 550m. It uses the same wavelength as 10Base-FL. Unlike 100Base-FX, this allows 100Base-SX to be backwards compatible with 10Base-FL. Because of the shorter wavelength used (850nm) and the shorter distance it can support, 100Base-SX uses less expensive optical components (LEDs instead of lasers) which make it an attractive option for those upgrading from 10Base-FL and those who do not require long distances.

100Base-BX is a version of Fast Ethernet over a single strand of optical fiber, while 100Base-FX uses a pair of fibers. Single-mode fiber is used along with a special multiplexer which splits the signal into TX and RX wavelengths. The two wavelengths used for TX and RX are 1310/1550nm. The terminals on each side of the fiber are not equal, as the one transmitting downstream uses the 1550nm wavelength, and the one transmitting upstream uses the 1310nm wavelength. Its transfer distances can be 10, 20 or 40 km. A 100Base-BX SFP operates on ordinary SMF (single mode fiber) single-strand link spans up to 10km.

Tips: Link Pass Through is a troubleshooting feature that allows the media converter to monitor both the fiber and copper RX ports for loss of signal. Auto-MDIX is a function automatically detects and configures the twisted pair port on the converter to the correct MDI-X configuration.