Power over Ethernet, or PoE, is a time-saving and money-saving technology that distributes power and data safely over an Ethernet cable to a targeted network or device. In the current market, if you take notice of switch types, you will find that there are PoE switch and also PoE+ switch. But what are their distinctions? How much do you know about them? In this article we have rounded up some knowledge to help you better understand PoE switch, PoE+ switch and their respective benefits according to different applications.

PoE was firstly defined in IEEE802.3af standard and upgraded to IEEE802.3at which is known as PoE+. PoE switches utilize PoE standard that can supply a maximum of 15.4 watts of DC power per port. While IEEE802.3at increases the maximum amount of power to 30 watts. However, some power will be lost over the length of cable. The minimum guaranteed power available at the PD (powered device) is 12.95 watts per port for PoE and 25.5 watts per port for PoE+. 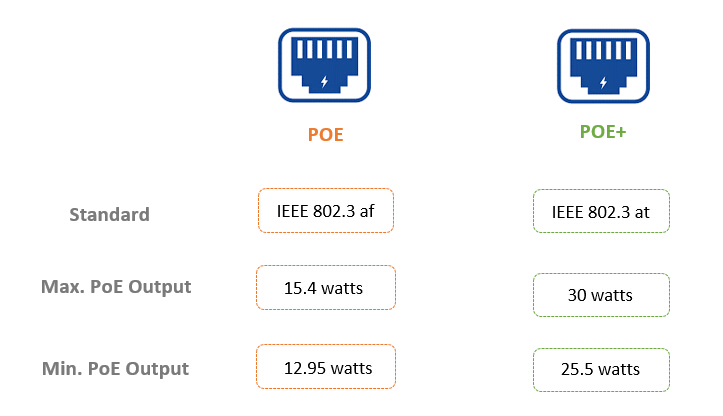 PoE Switch vs PoE+ Switch: What Is the Difference?

The main difference between PoE switch and PoE+ switch lies on the electrical power that each can carry or supply to the connected devices. PoE+ PSEs can provide almost twice as much power than PoE PSEs over the Cat5 cabling. The Max. power consumption of PoE switch is smaller than that of PoE+ switches. What is more, PoE+ power sourcing equipment provides 42.5 to 57 Vdc– an increased and much tightened range compared to 37 to 57 Vdc for PoE. Below is the detailed differences between PoE switch and PoE+ switch.

Many users may run into this problem. Should I choose PoE or PoE+ switch?

PoE switch provides enough power for most wireless access points, such as surveillance cameras and IP phones. Therefore, if your office is equipped with PoE switch and you are not planning to add high-end systems, then you probably don’t need a PoE+ switch. PoE switch is the simple choice for those who look for an easy setup for basic networking, which uses standard copper Ethernet cables, making it as simple as setting up a regular network. In addition, the price of it is more cheaper and affordable than a PoE+ switch.

If you want to invest in modern and advanced technological systems like VoIP, IP Cameras, Video Conferencing System (VCS) and etc, you should go for PoE+ switch. It provides dynamic power allocation, optimized power distribution and supreme power-supply utilization. IEEE standards require that PoE+ utilizes a Cat5 cable only which lowers the chance of possible impedance and reduces power dissipation.

PoE switch and PoE+ switch rationalize both of the processes of powering and providing data to the devices, which make them become straightforward and reliable equipment. In a word, for home network, a simple and cost-effective PoE is adequate. For business network, the PoE+ can support a more complete range of network devices. For more reliable 24 port PoE switch and 48 port PoE switch, FS would be a good choice.