The 100GBASE-LR4 QSFP28 transceiver converts 4 input channels of 25 Gbps electrical data to 4 channels of LAN WDM optical signals and then multiplexes them into a single channel for 100G optical transmission. On the receiver side, the module demultiplexes a 100G optical input into 4 channels of LAN WDM optical signals and then converts them to 4 output channels of electrical data. The central wavelengths of the 4 LAN WDM channels are 1295.56, 1300.05, 1304.58 and 1309.14 nm as members of the LAN WDM wavelength grid defined in IEEE 802.3ba. The 100GBASE-LR4 QSFP28 transceiver provides superior performance for 100G applications up to 10 km over SMF and compliant to optical interface with IEEE802.3ba 100GBASE-LR4 requirements. 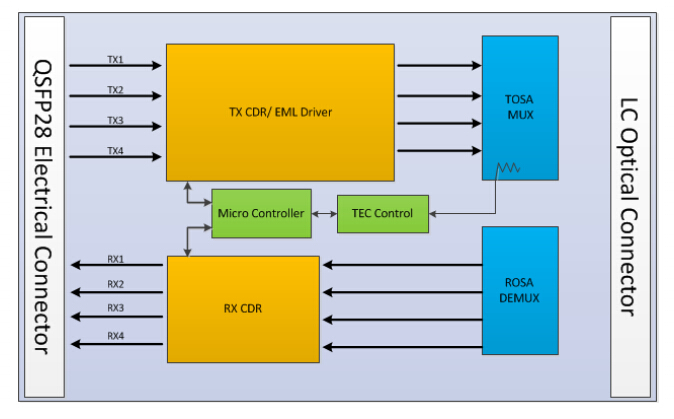 The 100GBASE-CWDM4 QSFP28 transceiver is a full duplex 100G QSFP28 optical transceiver that provides a high-speed link at aggregated data rate of 100 Gbps over 2 km on SMF. The transmitter path converts four lanes of serial electrical data to optical signal. The optical signals from the four lasers are optically multiplexed and coupled to single-mode fiber through an industry standard LC optical connector. The optical signals are engineered to meet the CWDM4 MSA specifications. On the receive side, the four incoming wavelengths are separated by an optical demultiplexer into four separated channels. 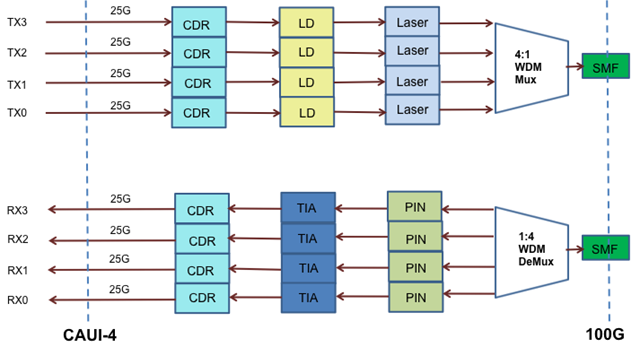