CWDM is a technology which multiplexes multiple optical carrier signals on a single optical fiber by using different wavelengths/colors of laser light to carry different signals. In a CWDM system, the CWDM Mux/DeMux is one of the most important component.

The CWDM Mux/DeMux modules are passive optical solutions which are easy to operate with a reliable low-maintenance design, and do not use power supplies or electronics. They are designed to provide optical networking support for high-speed Fibre Channel and Ethernet communication for MAN (metropolitan area network) over a grid of CWDM optical wavelengths. CWDM Mux/DeMux is capable of multiplexing and demultiplexing wavelengths up to 18 channels from 1270 nm to 1610 nm in 20nm increments. Moreover, it works seamlessly with transceivers to optimize link length, signal integrity and network cost, and can be incorporated into a single rack-mount solution for enhanced design, power and space efficiency.

With low-profile modular design, the FMU CWDM Mux/DeMux modules plug into one half of a 1RU, 19” rack mount chassis for simple installation and modularity. This chassis-based system allows a network equipment manufacture to add CWDM capability to any existing networks with simple pluggable interface. Besides, the equipment ports of the FMU CWDM Mux/DeMux modules are color-coded to match the wavelengths of CWDM transceivers to simplify installation and troubleshooting without having to remove the transceivers from the local equipment. This color-coded feature is the major advantage of this new FMU series modules and it do greatly simplify the process of connecting a CWDM transceiver to its associated device port. The following picture is an example of 8 channels 1470-1610nm dual fiber CWDM Mux/DeMux. This new FMU series CWDM Mux/DeMux modules deliver dramatic cost savings to network equipment manufacturers, enabling them to develop metro access systems that are lower in cost, easier to provision and simpler to operate. 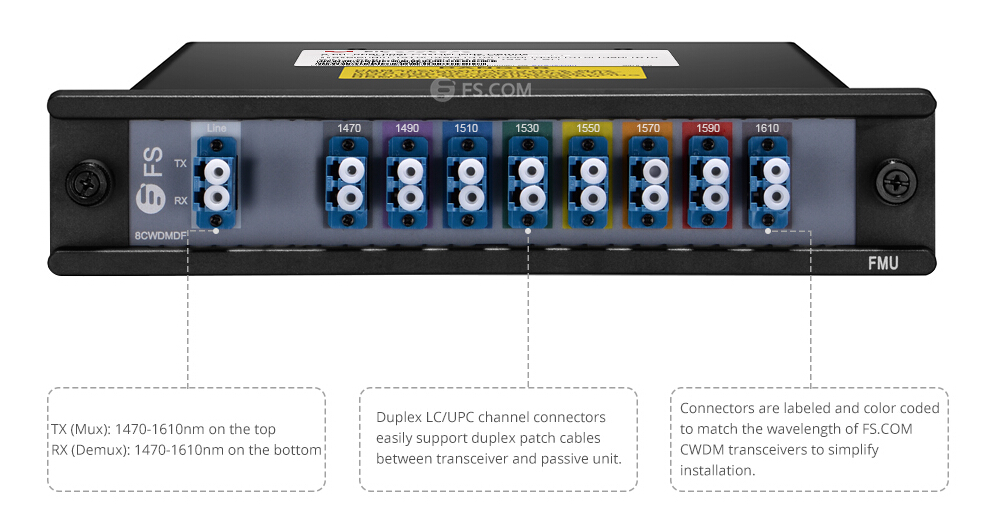 Both the traditional CWDM Mux/DeMux and the FMU series CWDM Mux/DeMux are used to increase fiber network capacity without the expense of deploying more fiber cables. They make full use of the low loss bandwidth of optical fiber to achieve ultra-high bit rate transmission. The key difference is that it is more convenient and efficient for the FMU CWDM Mux/DeMux to connect with the CWDM transceivers. FS.COM provides both the two kinds of CWDM Mux/DeMux modules. For more details, you can visit www.fs.com.