Passive optical network (PON) is a very significant class of fiber access system in the world and it enjoys a dominant position in the access market. GPON and EPON are the two classifications of PON. The primary differences between the GPON and EPON lie in the protocols used for upstream and downstream communications. This article will introduce PON, GPON and EPON sequentially.

A PON is a fiber network that only uses fiber and passive components like PON splitters and combiners rather than active components like amplifiers, repeaters, or shaping circuits. Thus PON network costs significantly less than those using active components, but it has a shorter range of coverage limited by signal strength. An active optical network (AON) is able to cover a range to about 100 km (62 miles), while a PON is typically limited to fiber cable runs of up to 20 km (12 miles). PON is also called FTTH (fiber to the home) network.

The typical PON arrangement is a point to multi-point (P2MP) network where a central optical line terminal (OLT) at the service provider’s facility distributes TV or Internet service to as many as 16 to 128 customers per fiber line. Dividing a single optical signal into multiple equal but lower-power signals, the optical splitters distribute the signals to users. An ONU (optical network unit) terminates the PON at the customer’s home. Usually, ONU communicates with ONT (optical network terminal). The ONU/ONT may be one device.

While each ONU gets the full downstream rate of 2.488 Gbits/s, GPON uses a time division multiple access (TDMA) format to allocate a specific timeslot to each user. It divides the bandwidth, so each user gets a fraction such as 100 Mbits/s depending on the way the service provider allocates it. The upstream rate is less than the maximum as it is shared with other ONUs in a TDMA scheme. The distance and time delay of each subscriber are determined by the OLT. Then software provides a way to allot timeslots to upstream data for each user. The typical split of a single fiber is 1:32 or 1:64, which means each fiber can serve up to 32 or 64 subscribers. Split ratios up to 1:128 are possible in some systems. 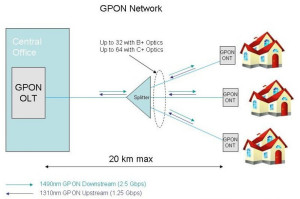 Based on the Ethernet standard 802.3, EPON 802.3ah specifies a similar passive optical network with a range up to 20 km. EPON uses WDM with the same optical frequencies as GPON and TDMA. The raw line data rate is 1.25 Gbits/s in both the upstream and downstream directions.

EPON technology provides bidirectional 1Gb/s links using 1490nm wavelength for downstream and 1310nm wavelength for upstream, with 1550nm wavelength reserved for future extensions or additional services. EPON is fully compatible with other Ethernet standards, so no encapsulation or conversion is necessary when connecting to Ethernet-based networks on either end. The same Ethernet frame is used with a payload for up to 1518 bytes. As Ethernet is the primary networking technology utilized in local area networks (LAN) and now in metro area networks (MAN), no protocol conversion is needed.

PONs are used to provide triple-play services including TV, and Internet service to subscribers. The lower cost of passive components means simpler systems with fewer components failing or requiring maintenance. The primary disadvantage is shorter range possible, commonly no more than 12 miles or 20 kilometers. As the demand for faster Internet service and more video grows, PONs are growing in popularity. The age of PON has begun. It is a new era of access network upon us.