DWDM is an innovation that enables multiple optical carriers to travel in parallel in a fiber. DWDM devices combine the output from several optical transmitters for transmission across a single fiber. At the receiving end, another DWDM device separates the combined optical signals and passes each channel to an optical receiver. Only one optical fiber is used between DWDM devices (per transmission direction). How DWDM system works, and what components are needed in the DWDM system? Keep reading this article and you will find the answer.

Transmitters are described as DWDM components because they provide the source signals which are then multiplexed. The characteristics of optical transmitters used in DWDM systems are highly important to system design. Multiple optical transmitters are used as the light sources in a DWDM system which requires very precise wavelengths of light to operate without interchannel distortion or crosstalk. Several individual lasers are typically used to create the individual channels of a DWDM system. Each laser operates at a slightly different wavelength.

The DWDM Mux (multiplexer) combines multiple wavelengths created by multiple transmitters and operating on different fibers. The output signal of a multiplexer is referred to as a composite signal. At the receiving end, the DeMux (demultiplexer) separates all of the individual wavelengths of the composite signal out to individual fibers. The individual fibers pass the demultiplexed wavelengths to as many optical receivers. Generally, Mux and DeMux components are contained in a single enclosure. Optical Mux/DeMux devices can be passive. Component signals are multiplexed and demultiplexed optically, not electronically, therefore no external power source is required.

The picture above shows the bidirectional DWDM operation. N light pulses of N different wavelengths carried by N different fibers are combined by a DWDM Mux. The N signals are multiplexed onto a pair of optical fibers. A DWDM demultiplexer receives the composite signal and separates each of the N component signals and passes each to a fiber. The transmit and receive signal arrows represent client-side equipment. This requires the use of a pair of optical fibers—one for transmit and the other for receive.

OADM is often a device found in WDM systems for multiplexing and routing different channels of fiber into or out of a single-mode fiber (SMF). It is created to optically add/drop one or multiple CWDM/DWDM channels into a few fibers, providing the power to add or drop a single wavelength or multi-wavelengths from a fully multiplexed optical signal. This permits intermediate locations between remote sites to gain access to the regular, point-to-point fiber segment linking them. Wavelengths not dropped pass-through the OADM and carry on towards the remote site. Additional selected wavelengths may be added or dropped by successive OADMs if required. 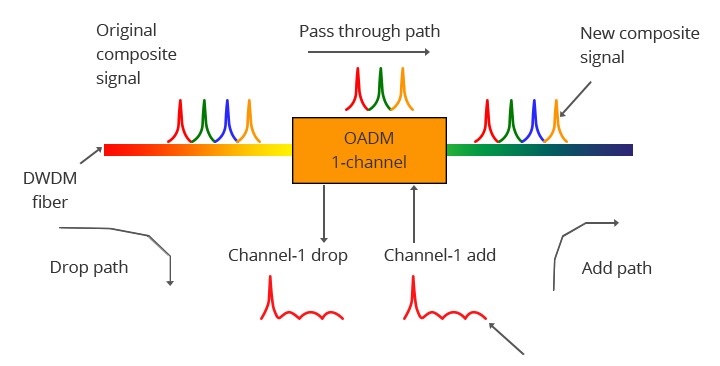 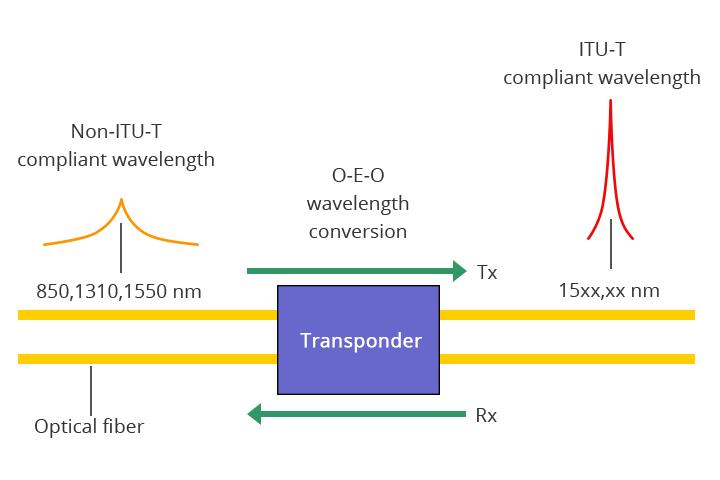