The rise of cloud computing and the expansion of data centers drive the upgrades of the latest Ethernet, but the big data based on cloud technology has increased the workload of operators. To meet this demand, data centers would generally increase bandwidth capacity in parallel with existing infrastructures in order to achieve the expansion. The rapid growth of 25G Ethernet deployments is expected to be a testament to this trend. For the purpose of handling increasing data load, the leading cloud enterprise has been working with its core network data center operators to turn to 25G Ethernet. Although 10G and 40G Ethernet have been introduced, 25G Ethernet is still one of the common choices in the data center. This article will explain why 25G is a hot favorite.

25G Ethernet is an emerging network technology standard, mainly for the data center network of next generation. To be more precise, 25G Ethernet is primarily used for server access of data centers in the next generation. If you have to ask why the access rate of data center network of next generation is 25G, rather than 10G or 40G? Because it solves the mismatch between the rates of 10G/40G Ethernet MAC (Media Access Control) layer and SerDes at PHY (Physical Layer). 25G Ethernet is mainly used for the access between ToR (Top of Rack) switches and servers, and it can significantly increase the access rate (2.5x) compared to 10G and reduce the corresponding cost compared to 40G. Ethernet cards of 25Gbps can be better matched to the rate of PCIe lane on the server. To sum up, 25G is faster than 10G, more effective than 40G, and costs less than 40G.

SerDes (abbreviation of Serlializer and Deserializer) is an integrated circuit or transceiver used in high-speed communications for converting serial data to parallel interfaces and vice versa. The transmitter section is a serial-to-parallel converter, and the receiver section is a parallel-to-serial converter. Currently, the rate of SerDes is 25Gbps. That is to say, we can only use one SerDes lane of 25Gbps to connect from 25GE card to the other end of 25GE card. In contrast, 40GE needs four 10G SerDes lanes to achieve connection. As a result, the communication between two 40GbE cards requires as many as four pairs of fiber. In addition, 25G has a distinct advantage over 40G in terms of its matching with 100G, since only four SerDes of 25Gbps (4x25G) are needed to achieve connection. 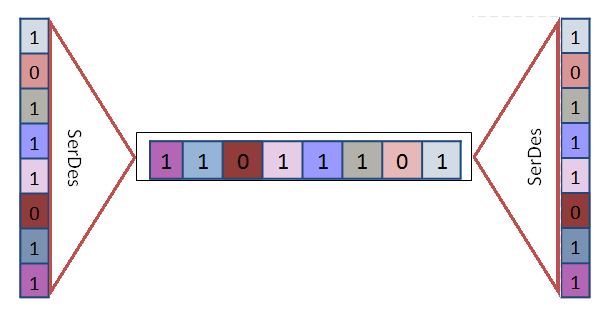 Figure 2: A SerDes facilitates the transmission between two points that use parallel data over serial streams, reducing the number of data paths and connecting pins. On the transmitter side, parallel data are converted to serial data, and vice versa.

At present, the mainstream Intel Xeon CPU only provides 40 PCIe 3.0 lanes. The lane bandwidth of a single PCIe 3.0 is about 8Gbps. These PCle lanes are not only used for communications between CPU and network cards, but also for connection between RAID cards, GPU cards, and all other peripheral cards. Therefore, it is necessary to consider the utilization of limited PCIe lanes by the network cards more efficiently. Single 40GE card needs at least one PCIe 3.0 x8 slot, so two 40GE cards need to occupy two PCIe 3.0 x8 lanes. Even if the two 40G ports can run full of data at the same time, the actual lane bandwidth utilization is only: (40G+40G) / 8G*16= 62.5%. On the contrary, 25GE card only needs one PCIe 3.0 x8 lane, and then the utilization efficiency is 25G*2 / (8G*8) = 78%. Apparently, 25GE is significantly more efficient and more flexible than 40GE in terms of the use of PCIe lanes.

The Cost of 25GE Wiring Is Lower

40GE card and the switch use QSFP+ module for short distance. For longer distance, QSFP+ has to be cooperated with MPO fiber optic cable to transmit, but MPO fiber optic cable has 12 optical fibers inside, which costs more than LC optical fibers of 10GE and what’s worse, they can’t be compatible. If now upgrading to 40GE based on 10GE, all the fiber optic cables shall be abandoned and rewired, which not only consumes manpower, material resources but also time. In comparison, 25GE card and switch use SFP28 modules and can be compatible with LC optical fibers of 10GE due to single lane connection. If upgrading from 10GE to 25GE, rewiring shall be avoided, which turns out to be time saving and economical at the same time.

The 25G Ethernet technology is ready for primetime. It offers higher speed, lower power consumption and lower cost per bit compared to 10G and 40G Ethernet. Besides, it serves a perfect match for PCIe lane, and the SerDes lane of 25Gbps can match better with 100G. I hope this article can help you know more about 25G Ethernet.