In computer industry, technology undergoes rapid progress for data transmission at high speed. Defined by the IEEE 802.3-2008 standard, gigabit Ethernet just achieved this performance by using various fiber optical products, including GBIC and SFP transceiver modules. GBIC vs. SFP: this post will discuss when we use these two kinds of transceivers.

A GBIC (gigabit interface converter) is typically used in gigabit Ethernet and Fibre Channels. A GBIC connector plugs into a Gigabit Ethernet port or slot and then links the port with the network. It can support several physical media, such as copper and optical fiber. As a standard for transceivers, it is non-proprietary and defined by the Small Form Factor Committee in document number 8053i. Moreover, its flexibility makes it attractive in networking equipment, as it is opposed to fixed physical interface configurations. 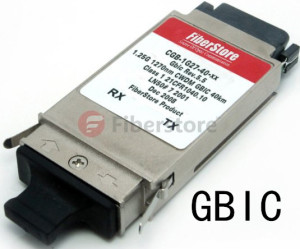 SFP (small form-factor pluggable) is a compact, hot-swappable transceiver. It interfaces a network device motherboard (for a switch, router, media converter or similar device) to a fiber optic or copper networking cable. This kind of transceiver is specified by a multi-source agreement (MSA) and is the upgraded version of GBIC, used for both telecommunication and data communications applications.

GBIC transceivers share similar features with SFP transceivers. Both of them can be interchanged on various Cisco products and can be intermixed in combinations of 1000BASE series products, such as Cisco 1000BASE-T SFP, 1000BASE-SX SFP, 1000BASE-T GBIC and 1000BASE-SX GBIC interfaces on a port-by-port basis. Also, GBICs and SFPs can assure you same performances. As for their differences, GBIC was earlier in use than SFP. Although SFP has smaller size than GBIC, SFP can offer more numbers of interfaces than GBIC on the same line.

Considering when to use SFP or GBIC should depend on specific situations. For example, SFP slots match SFPs, while GBIC SLOTs need GBICs. But due to the fact that SFP gains more and more popularity among consumers, it has replaced GBIC to some extent. In addition, Fiberstore can also offer those GBIC/SFP transceivers with same performances at more reasonable prices. Besides those above-mentioned 1000BASE series, 10/100BASE-T, 10/100BASE-FX networking equipment are available. You can visit Fiberstore for more information about transceivers.