Optical communication systems’ transmission capacity continues to be increasing forever. From telegraph systems carrying a few clicks per second a hundred years ago, towards the state-of-the-art, long-distance, DWDM Network systems carrying over one Tbps today, the capacity of wired long-haul systems has burgeoned in an average annual increase of around one third (or perhaps a doubling approximately) every 2 yrs.

New optical devices and capability have played a significant role within the evolution of wired long-haul communication transmission because the late 1970s, beginning with the introduction of the LED and MMF, and also have been an essential ingredient of progress since. By encoding data as the presence or lack of light and using glass in the form of MMF as the transmission medium, single- channel capacities of 45-90 Mbps and transmission distances of around 10 km were possible. Just before that, digital communication was entirely the province of electronics, and transmission was carried over electrical coaxial cable at maximum bitrates of 565 Mbps and distances of 1 km between regenerators, as well as by wireless transmission. Through the mid to late 1980s, SMF and injection lasers permitted transmission of 565 Mbps to 2.5 Gbps over distances of 100 km without regeneration. It’s worth noting that the first use of Optical Switches in fiber communication was during this period; they were used for the sparing of injection lasers in submarine systems, because the expected lifetime of a semiconductor injection (laser being newly introduced) wasn’t confidently recognized to exceed the expected system lifetime of more than Two decades. 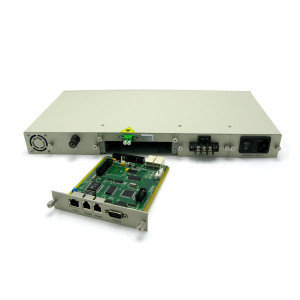 After the displacement of electrical coax by optical fiber and optoelectronic transmitter/receivers or transceivers, the following extraordinary advance in optical fiber communication took place the early 1990s using the introduction of practical optical amplifiers. These EDFA Optical Amplifiers obviated the requirement for frequent electronic regeneration. So effective were Erbium-Doped Fiber Amplifiers (EDFAs) that the transmission reach attainable before electronic regeneration was no longer determined by the optical lack of the transmission fiber. Rather, pulse dispersion and laser chirp became the limiting factor. This situation in turn drove the development and deployment of more refined transmitters according to external modulation. Using optical amplifiers and lithium niobate external modulators, transmission distances approaching 1000 km could be achieved at 2.5 and 10 Gbps over standard and dispersion-shifted fiber, respectively.

Following closely on the heels of the introduction of the EDFA and transform-limited transmitters was the breakthrough and disruptive introduction of business DWDM, which took place in the mid 1990s. The DWDM system combines (multiplexes) multiple optical signals so that they can be amplified and transported over a single fiber like a group, and separates (demultiplexes) the person wavelength channels in the receiving end. This capacity-enhancing capability is made possible by advances in optical waveguide technology-integrated optics or photonic integrated circuits, which permitted wavelength demultiplexing with close channel spacing and low crosstalk and is analogous to electronic multiplexer/demultiplexers (MUX/DEMUXes). A substantial increase in the number of wavelengths that could be transported was also made possible by improvements in EDFA technology and optical filter technology. The mixture of broadband optical amplification and DWDM has already established a revolutionary effect on fiber communication, as it provided not only significant increases in system capacity but additionally a substantial reduction in cost. This is because using DWDM, just one optical amplifier could simultaneously amplify all the wavelength channels continued an optical fiber, and also the distance between repeaters was increased several fold in comparison to non-optically amplified systems.

Initially, DWDM offered a more affordable way to increase transport capacity without upgrading the existing fiber plant or terminal equipment by avoiding the signal degradation brought on by dispersion at higher TDM bitrates. It also offered the flexibleness to expand capacity within any part of a network by making many more channels available per fiber. To deal with traffic growth, network providers have deployed such DWDM systems, which can transmit multiple channels simultaneously over one fiber, each wavelength carrying 2.5 or 10 Gbps SONET or SDH channels over distances as much as 700 km before requiring regeneration. Initial generations of DWDM systems which were brought to the marketplace beginning in 1995 could transmit 2-16 wavelength channels simultaneously. Today’s commercial systems can carry 128 channels 10 Gbps (or more than 1 Tbps) over unregenerated distances of several thousand kilometers. In the near future, the bitrate increases to 40 Gbps or more per wavelength to aid the anticipated increased usage. 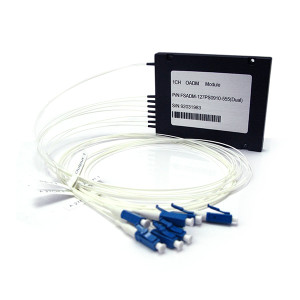 Early DWDM line systems transported optical signals directly between electronic end terminals, i.e., point-to-point, without access to wavelengths at intermediate locations. However, in the late 1990s, improvements in optical amplifier, MUX/DEMUX, filter, signal monitoring, and fiber technology provided the power to expand the DWDM capacity to 40-120 wavelengths and extend the transmission distances to 1000 km at bitrates of 2.5 to 10 Gbps. With this particular came the need to access optical capacity at locations between major nodes. To provide intermediate access, linear wavelength Optical Add/Drop Multiplexers (OADMs) were incorporated at sites between end terminals. The first OADMs introduced were fixed types configured manually at installation. Now, a further step in the evolution of optics in digital transport is occurring with the implementation of automated flexible and Reconfigurable OADMs (i.e., ROADM), which permit network operators to remotely provision the addition and removal of individual wavelengths. These networking features require optical switches to supply the desired remotely programmable reconfigurability.

Today, long-distance global backbones, as well as regional networks, are virtually entirely according to fiber optic cables. Among the few exceptions are free-space radio and optical systems, that are used to traverse terrain where running cable is prohibitively expensive. Today, the majority of long-distance traffic during these networks is routed via nodes at major population centers using 2.5 and 10 Gbps channels carried on DWDM over single-mode optical fibers. Soon the maximum TDM rates will increase to 40 Gbps, transmission distances of 1-10 Mm will be possible, and the number of wavelength channels carried will approach 200.

The utilization of optical switches in the centre of optical layer cross-connects in nodes of the fiber transport network, may be the latest illustration of the ongoing replacing electronics by optics in long-distance voice and knowledge communication. With the advent of optical multiplexing/demultiplexing and optical switching, optics not only represents a path to increasing capacity but a radically new infrastructure for networking. Using optical layer cross-connects and flexible OADMs to manage bandwidth within the core, you’ll be able to more efficiently provision, rearrange, and restore high-bitrate channels carried on wavelengths. The first deployments of optical switches for managing bandwidth in long-haul fiber communication were 72 x 72 multimode Optical Cross-Connects (OXCs) for 622 Mbps in 1996. However, as late as 2000 the majority of the international R&D community considered single-mode OXCs with several hundreds of I/O ports unfeasible and gave them little attention. Today, a few short years after the challenge of developing large-port-count single-mode optical switch fabrics was undertaken in earnest 256 x 256 OXCs for just 2.5 Gbps and better data rates happen to be commercialized and deployed, and research prototypes having an astonishing 576 x 576 and 1296 x 1296 ports have been reported.