A Passive Optical Network (PON) is illustrated schematically in the figure below. A feeder fiber from the Central Office (CO) runs to a Remote Node (RN), which houses a passive optical power splitterkombiner. From there, around 32 fibers branch out to the subscribers. If these fibers extend all the way to the homes (H), as shown in the figure, this system is known as a Fiber-To-The-Home (FTTH) system. Alternatively, if the fibers terminate at the curb, the system is known as a Fiber-To-The-Curb (FTTC) system. The final distribution from the curb to the homes is accomplished, for example, by twisted-pair copper wires or radio. All systems that bring the fiber relatively close to the subscriber are collectively known as FTTx systems. 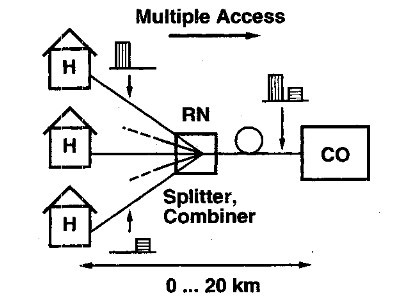 In a traditional telephony access network, the connection between the CO and the remote node is a digital, possibly optical line. The final distribution from the remote node to the subscribers, however, is accomplished with analog signals over twisted-pair copper wires. Thus, the remote node must be active; that is, it needs to be powered to perform the conversion from the high-speed digital signal to the analog signals. In contrast, a PON system is all optical and passive. Because a PON does not require outside power supplies, it is low in cost, easy to maintain, and reliable.

A PON is a point-to-multipoint network because the optical medium is shared among the subscribers. Information transmitted downstream, from the CO to the subscriber, is received by all subscribers, and information transmitted upstream, from the subscribers to the CO, is superimposed at the passive combiner before it is received at the CO. To avoid data collisions in the upstream direction, the subscriber data must be buffered and transmitted in short bursts. The CO must coordinate which subscriber can send a burst at which point in time. This method is known as Time Division Multiple Access (TDMA) and requires burst-mode transmission. The downstream direction is more straightforward: the CO tags the data with addresses and broadcasts it to all subscribers in sequential order. Each subscriber simply selects the information with the appropriate address tag. This method is known as Time Division Multiplexing (TDM), and conventional continuous-mode transmission can be used. Upstream and downstream transmissions usually are separated by using two different wavelengths (WDM bidirectional transmission).

See the related products in Fiberstore: 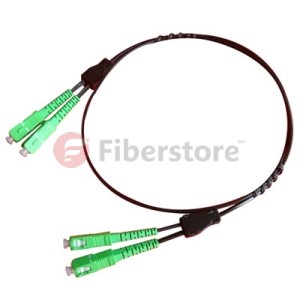 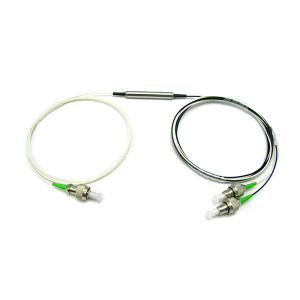 The most promising PON systems are as following:

1. BPON (Broadband Passive Optical Network), which cames the data in ATM cells and hence also is known as ATM-PON.

2. EPON (Ethernet Passive Optical Network), which cames the data in Ethernet frames, as the name implies. In general, PON FTTx networks are limited to relatively small distances (up to 20 km) and currently are operated at modest bit rates (50 Mbps to 1.25 Gbps). In a typical BPON FTTH scenario, 16 to 32 homes 9 share a bit rate of 155 Mbps, giving each subscriber an average speed of 5 to 10 Mbps. This is sufficient for fast Internet access, telephone service, and video on demand. Sometimes, an all-optical CATV service is provided over the PON infrastructure by means of a third wavelength.

Besides the TDM/TDMA approach outlined above, there are several other types of PON systems. For example, the WDM-PON system, where a different wavelength is assigned to each subscriber, has been studied extensively. In WDM-PON systems, data collisions are avoided without the need for burst-mode transmission. However, the Optical WDM Components required for such a system currently are too expensive, making WDM-PON uneconomical. For more information on PON systems see Fiberstore PASSIVE OPTICAL NETWORK TUTORIAL.