One of the great attractions of optical circulators is the relatively low level of loss. Typical devices give a port-to-port loss of between 0.5 dB and 1.5 dB. Optical circulators are very versatile devices and may be used in many applications. For example, a bidirectional link consisting of two fiber strands (one for each direction) is multiplexed onto a single strand of fiber. This might be done to save the cost of fiber. Of course if you did something like this you would need to take particular care to minimise reflections on the link.

Operating Principle
By itself there is no single, simple principle behind the optical circulator. Optical circulators are made of an assembly of optical components. There are many different designs but the key principle is like that of the optical isolator. The basic function of a circulator is illustrated in the figure below. Light entering at any particular port travels around the circulator and exits at the next port. Light entering at port 1 leaves at port 2, entering at port 2 leaves at port 3 and so on. The device is symmetric in operation around a circle. 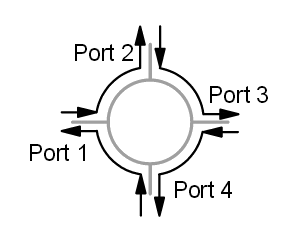 Light travelling in one direction through a Faraday rotator has its polarisation rotated in one particular direction. Light entering the Faraday rotator from the opposite direction has its phase rotated in the opposite direction (relative to the direction of propagation of the light). Another way of looking at this is to say that light is always rotated in the same direction in relation to the rotator regardless of its direction of travel. This is complicated by the presence of unpredictable polarisation. We could filter the unwanted polarisation out but we would lose (on average) half our light in doing that—and often a lot more. So we separate the incident “ray” into two orthogonally polarised rays and treat each polarisation separately. The two halves of the ray are then re-combined before being output to the destination port.

Here is a figure showing a basic 3-port optical circulator. Its components function as following: 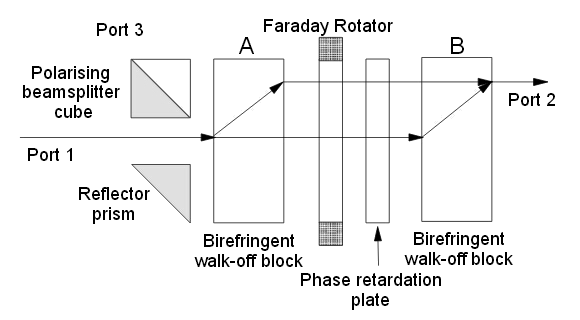 As shown in the 3-port optical circulator, light travels from Port 1 to Port 2 as following: 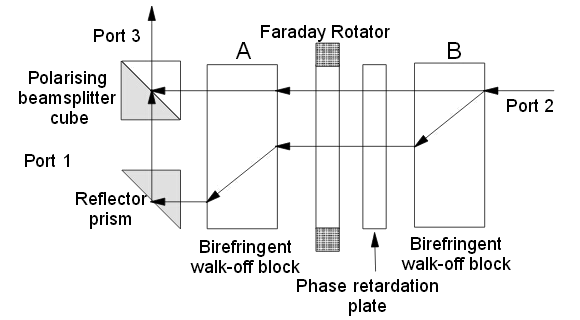 Coupling to fiber on input and output would normally use a lens of some kind. Typically a GRIN lens might be used here. The path from Port 2 to Port 3 is somewhat more involved:

Note: If you only connect Ports 1 and 2, the optical circulator can be used as an Optical Isolator. Indeed if you leave out the beamsplitter cube and the reflector prism, you have an excellent (very low loss) polarisation independent isolator. A path from Port 3 to Port 1 can be constructed by adding additional components; however, for most applications this is unnecessary as we don’t want the connection from Port 3 to Port 1 anyway.

Conclusion
There are many ways to construct optical circulators (both 3 and 4 port). All of these ways use combinations of components and similar principles as those described above. The biggest problem with optical circulators is that the components must be manufactured to very close tolerances and positioned extremely accurately. This causes the cost to be relatively high. However, you could find Cost-effective Optical Circulators in Fiberstore.