Ninety-nine percent of international data is transmitted by submarine communication cables laid on the sea bed between land-based stations to carry telecommunication signals across stretches of ocean. These undersea cables are hundreds of thousands of miles long and can be as deep as Everest Is tall, as well as enable our globalized society by facilitating the transfer of digital information. This article will tell how to make, lay and repair submarine cables.

How to Make Submarine Cables?

The core of undersea cables is covered with brass tape which is impervious to the assault of the aqueous worm called teredo which is the greatest enemies of submarine cables. The completed core with the brass taping is fully wrapped by jute yarn, a coarse hemp, steeped in a tarry preservative. Wound around the core, this jute yarn serves as a bedding for the outer protecting wires. After several servings of the jute yarn have been applied to the core, the whole is then covered with galvanized iron wires which vary in number and thickness according to the depth of water the cables is to lay in.

Cables laid in deep water are lighter than those laid in shoaler water. Why? Because if the cables are too heavy in deep water, the strain of raising cables would be so great that it may be impossible to recover the cables for repair purposes. Moreover, there is very little to injure submarine cables in the deep water.

How to Lay Submarine Cables?

The laying of long submarine cables is not easy. The telecom engineers toil long and tedious hours to make this possible. Submarine cables are laid down by using specially modified ships. On reaching the place selected for the landing of the cable, the ship approaches as close to the shore as possible and, letting go anchor, prepares to land the shore end. Some companies use rafts to achieve this, while others use a couple of spider-sheaves, or large VV-shaped wheels in light iron frames are sent ashore and fixed by sand anchors some 60 yards apart. Hauling lines are paid out from the ship, reeved through the sheaves and brought back on board again. One end of this continuous lines is attached to the picking-up gear and the other to the cable. The engines are then set in motion, and the cable is dragged slowly out of the ship towards the shore. As it goes, large wooden casks or inflated India rubber buoys are lashed to it every 50 or 60 feet, to keep it afloat and prevent the damage which would result from it being dragged along the bottom. 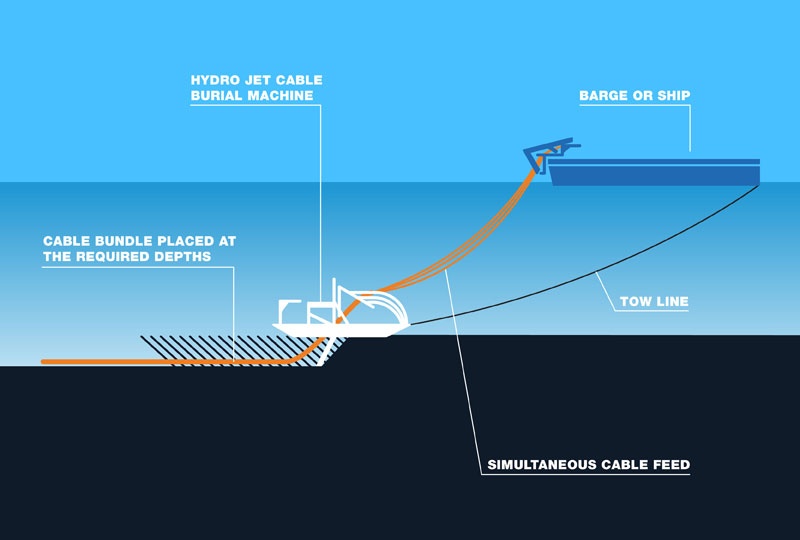 When sufficient cable has been landed, the length on shore is laid in a trench which runs from low water mark to the cable landing station (CLS), and the end is inserted through a hole in the floor. Then there will be testing and speaking instruments set up in the CLS. For day and night, the testing goes on. The ship gets slowly under way when a satisfactory test has been taken.

How to Repair Submarine Cables?

The first indication that a cable is broken or faulty is the failure of the receiving apparatus to properly record incoming signals. When a break or a fault in the line is indicated by the receiving instruments, a test is immediately made from each end of the line. These tests are taken with very sensitive apparatus. Several methods of testing are employed in the localization of complete or partial interruptions of cables, with the most general being the Wheatstone Bridge balance.

The operation of repairing submarine cables is no child’s play. It is a kind of work which requires sturdy and fearless manhood as well as skillful seamanship. Most of the breaks happen during seasons of the year when the weather conditions at sea are most severe. It is common for a cable ship to spend months at sea waiting for suitable weather conditions to carry on operations.

By reading the above statements, have you got more knowledge about the submarine cables’ making, laying and repairing? It may not be rich in content, but submarine cables are indeed important members of fiber cables and do play an important role in international data transmission.