It has been known to us that a hierarchical internetworking model contains core layer, distribution layer and access layer. In this hierarchical model, network switch is accordingly implemented in different network layer. A core switch, also known as a tandem switch, is a high-capacity device generally located within the backbone or physical core of a network. It serves as the gateway to a wide area network (WAN) or Internet so as to provide the final aggregation point for the network. Therefore, a backbone core layer switch is usually a fiber switch for advanced optical connection. Then what are the distribution switch and access switch? Given its function, what are their difference? This article may help you to cue in on the in-depth understanding of distribution vs access switch. 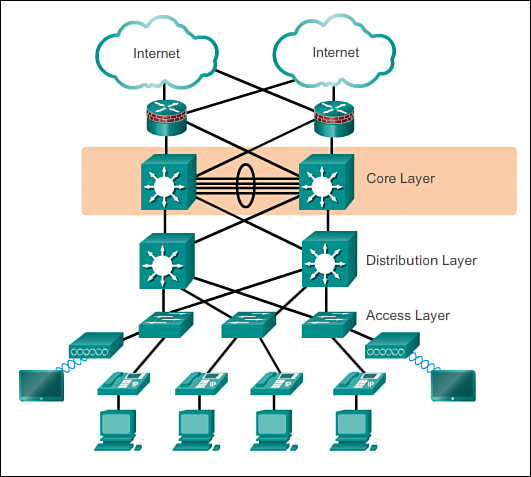 Distribution switch and access switch perform their respective duties in each hierarchy and work in accordance with relevant principles.

In hierarchical internetworking model, the access layer is the lowest level and most fundamental layer in all these three layers. An access layer switch is usually a Layer 2 switch and facilitates the connection of end node devices to the network. In generally, it is not a high-powered switch when compared with those at the distribution layer.

Packet Filtering: It processes packets and manages the transmission of packets based on its source and destination information to create network borders.

QoS: Distribution switch can read packets and prioritize delivery based on the policies that users set.

Application Gateways: This function creates protocol gateways to and from different network architectures.

An access switch allows users to connect to the network. On this account, access switch is normally endowed with the supportable features of port security, VLANs, Fast Ethernet/Gigabit Ethernet and etc.

Port Security: It is the ability that the access switch can decide how many or what specific devices are allowed to connect to the access switch. It is a first line of defense for a network.

VLANs: It is an essential component for a converged network. Access layer switches allow users to set the VLANs for the end node devices on network.

How to Choose the Right Distribution Switch?