CWDM system is a passive optical solution for increasing the flexibility and capacity of existing fiber lines in high-speed networks. It increases fiber capacity by placing widely spaced, separate wavelengths (between 1310 nm and 1610 nm) from multiple ports onto a single-mode fiber pair on the network. The CWDM system components are passive and require no power supplies. This article will introduce the components used in CWDM system.

Generally, there are three basic components in a CWDM system, which are the multiplexer/demultiplexer (Mux/Demux), the drop/pass module and drop/insert module. CWDM applications are described in terms of an east-west connection. Different colors represent individual channels. Westbound traffic is represented by dashed lines, while eastbound traffic is shown with solid lines.

The Mux/Demux based on film filter is the most mature component used in CWDM system. It combines different channels onto a single outbound (TX) fiber. Simultaneously, the Mux/Demux receives the same channels from a single inbound (RX) fiber, separates them into individual wavelengths, and delivers each to the appropriate local interface. This process expand the capacity of the existing network fiber cable. The following is an example of four channel Mux/Demux.

The four-channel Mux/Demux can be configured to support additional channels through the expansion port. By cascading the modules in series, you can increase the total number of available network channels. The channels connecting to the expansion port must differ from those on the Mux/Demux to which they are being cascaded. 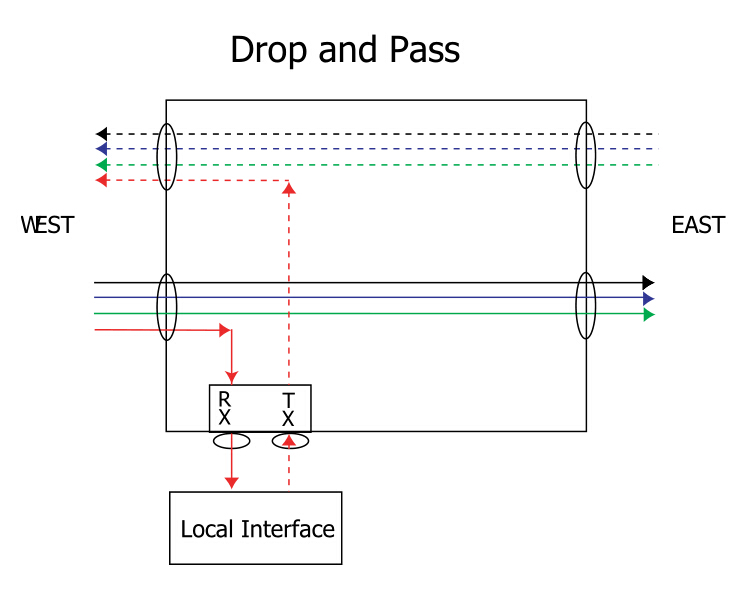 The drop/insert module provides two local interface ports. One port removes a wavelength-specific channel from the network fiber in one direction, and the other port adds that same channel back onto the fiber in the opposite direction. Because the drop/insert module supports two separate pathways going in opposite directions, network viability in a ring topology is ensured even if there is a break in the network.

CWDM is a simple and affordable method to maximize existing fiber by decreasing the channel spacing between wavelengths. Since CWDM is a passive technology, it allows for any protocol to be transported over the link, as long as it is at a specific wavelength. Because the multiplexers simply refract light at any network speed, regardless of the protocol being deployed, CWDM can help to future proof the networking infrastructure. In all, CWDM is a low-cost and effortless technology to implement. FS.COM provides a whole series of WDM system components including CWDM and DWDM. If you need, you can visit www.fs.com for the details.